On July 14 earnings season in USA started and it will last till the end of August. All the traders around the world look forward to this period because quarterly earning reports cause high volatility and provides an excellent opportunity to get high profit within just a couple of hours.

This is a very active time for traders compared to such important economic events as Nonfarm Payrolls release and Fed meetings.

According to leading FreshForex analyst Catherine Main the market anticipates positive data releases considering business activity growth in both manufacturing and non-manufacturing sectors in the second quarter. Strong statistics will push shares prices to the upside and S&P500 is ready to renew its historical high.

Here is a schedule of report releases of the most publicly traded companies in market: 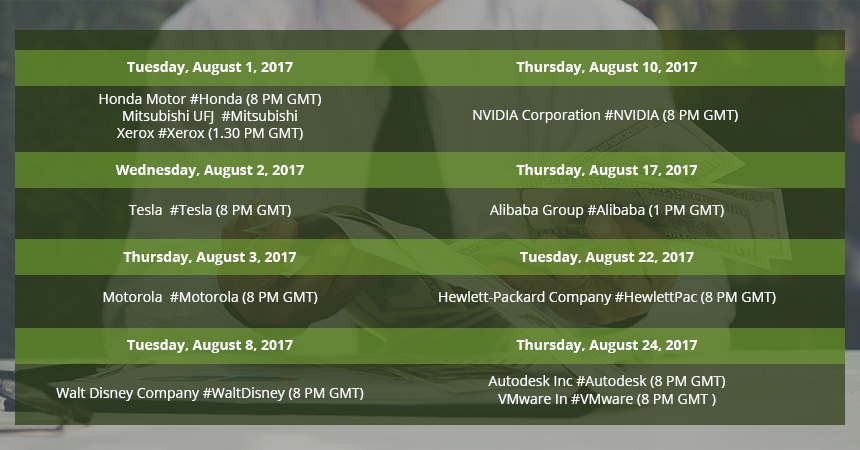 Specially for you during the earnings period you can get 50, 100 or 200 dollars for 10 lots according to «Megarebate 2.0». Hurry up, the offer is limited!

Follow up-to-date news about the most interesting earnings reports in your trading platform and get high profit during high volatility period!

ATTENTION! Here we will add results of report releases of the market leaders:

Bank of America: in the second quarter income has fallen in two times to $22.8 billion. Within two hours after report release shares have fallen by 1,2%, that suggests income of 12.5% using leverage of 1:10.

IBM released the quarterly earning report after the market closing. In the second quarter the income has fallen by 4.7%, to $19.3 billion. On July 19th at market opening at 1.30 p.m. GMT IBM shares are highly expected to fall.

Morgan Stanley: net profit of the bank in the second quarter has increased by 16% to $0,87 per share. #MorganStan shares have grown by 3.2% against the level of market closing on Tuesday, that suggests income of 32.2% using leverage of 1:10.

Microsoft reported revenue growth this Thursday, and their profits have increased by 19.8% and 42% respectively. The report was released after market closing, so today the company shares' uptrend may be expected.

Visa: the quarterly report pleased traders with positive data. Revenue and profit have increased by 25.6% and 24.6% respectively. The report was released after market closing, so on July 21 the company shares' uptrend may be expected.

Colgate-Palmolive: Net profit per share in the second quarter has increased by 2.8% to $0.7, which is the best quarterly result over the last two years! After market opening, Colgate-Palmolive shares grew almost non stop. At the end of the day shares grew by 4.7%, that suggests income of 47% using leverage of 1:10.

Alphabet #Google: reported revenue and profit exceeded expectations of market participants, that allows us to expect the company's shares growth today on July 25, as the report was released yesterday after market closing.

3M: company's earning report disappointed traders, as revenue and profit turned out to be significantly below consensus. Weak data caused shares drop by 2.6% during the day. Sell position with leverage 1:10 would have increased you deposit by 26%.

Caterpillar: traders were pleased with the strong financial results of the company. Net profit has increased by 36.7%. From the very opening of the markets shares went up and at the end of the day increase was 1.3%, that suggests income of 13% using leverage of 1:10.

General Motors: in the second quarter revenue has decreased by 12.7%, that caused shares fall by 1.4%. Sell position with leverage 1:10 would have increased you deposit by 14.4%.

Coca-Cola: one of the world's leaders of nonalcoholic beverages production pleased traders with good news on Wednesday. Net profit and revenue exceeded market expectations, that caused shares growth by 2.7% and suggests income of 27% using the leverage 1:10.

Nokia: revenue of Nokia in the second quarter decreased by 49.4% to $5.6 billion. The company loses position in the market because consumers prefer Apple products. After report release Nokia shares dropped by 2.6%, that suggests income of 26% using leverage of 1:10.

Xerox: net profit beat consensus estimate and increased to $0.87 per share. After market opening on Tuesday Xerox shares grew by 5%, that suggests income of 50% using the leverage 1:10.

Mitsubishi: net sales increased by 8% compared to a similar period of the previous year, on Tuesday shares grew by 0.6%, that suggests income of 6% using the leverage 1:10.

Tesla reported a narrower-than-expected profit loss and an almost doubled revenue this quarter, loss per share didn't exceed $1.33 vs. $1.82 expected. On August 2nd the shares grew by 2%, that suggests income of 20% using the leverage 1:10.

Motorola: company's profit turned out to be better than consensus estimate — $1.12 per share, it increased by 9% compared to a similar period of the previous year. Revenue increased by 5% to $1.497 billion.

Walt Disney: after market closing on Tuesday the company reported increase in net profit to $1.58 per share, that is much higher than consensus estimate. Market opens today at 1.30 PM GMT and we may expect shares rise. Market has already anticipated positive report, so #WaltDisney shares rose by 0.59%, that suggests income of 5.9% using leverage 1:10.

NVIDIA Corporation released its earnings report for the second quarter of 2017 on August 10th after market closing and reported net profit increase by 152%. Over the first quarter of 2017 the company's revenue has increased by 84.7%. We are observing now increasing business growth, which will be positively received by market participants. Stock market opens today at 1.30 PM GMT and #NVIDIA is highly likely to rise.

Alibaba Group reported increase of net profit by 50% in the second quarter. Reaction of the market was positive: the shares grew by 1.06%, that suggests income of 10.6% using leverage 1:10.

Autodesk: earnings report turned out worse than market participants expected. Revenue and profit fell by 10% and 50% respectively. The report was released yesterday after market closing, so today a drop of #Autodesk shares may be expected.

VMware reported revenue and net profit rise in the second quarter by 6.7% and 4.3% exceeding trades' expectations. The report was released yesterday after market closing, so today a rise of #VMware shares may be expected.

Hewlett-Packard reported increase in net profit by 19.4% in the second quarter. Today stock market opens at 1.30 p.m. GMT, and rise of #HewlettPac shares may be expected.

If you have any questions, don't hesitate to contact us: