Monthly chart: So, January was closed by internal bearish bar, which partly eliminated the potential of the December pin and confirm our expectations of soon turn down. It is likely that we will see a pullback to the middle Bollinger band (1847.7), which can be modified by upper band (2142.6). This scenario is described by red arrow. As an alternative scenario it can be considered a complete breaking uptrend due to reduction under the middle band and fall to the lower (1544.4. See the blue arrow). 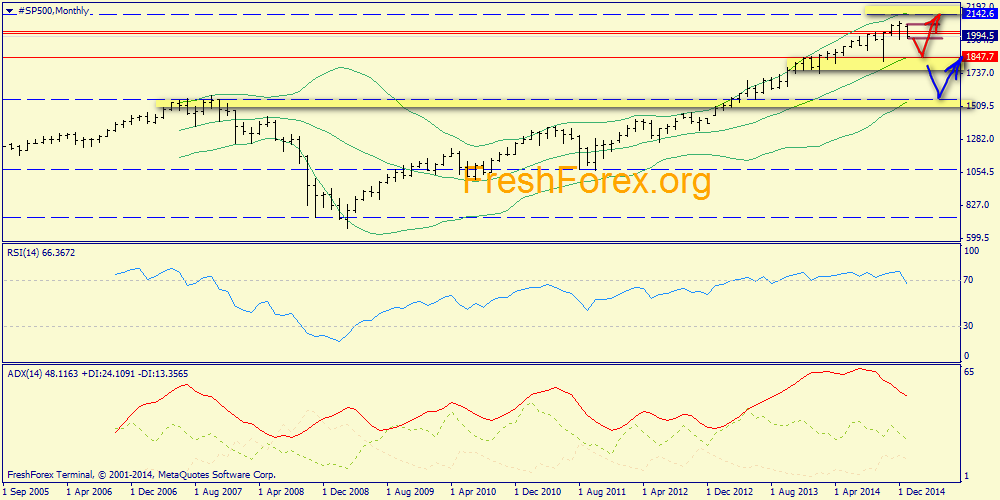 Weekly chart: reduction occurs here on insufficient ADX indicators, therefore, it is likely that the support can act and the level of 1913.0 (the lower Bollinger band, red arrow). Blue arrow shows the detailed version in which the bears will be able to break 1847.7 support that provide their capacity for moving to 1544.4. 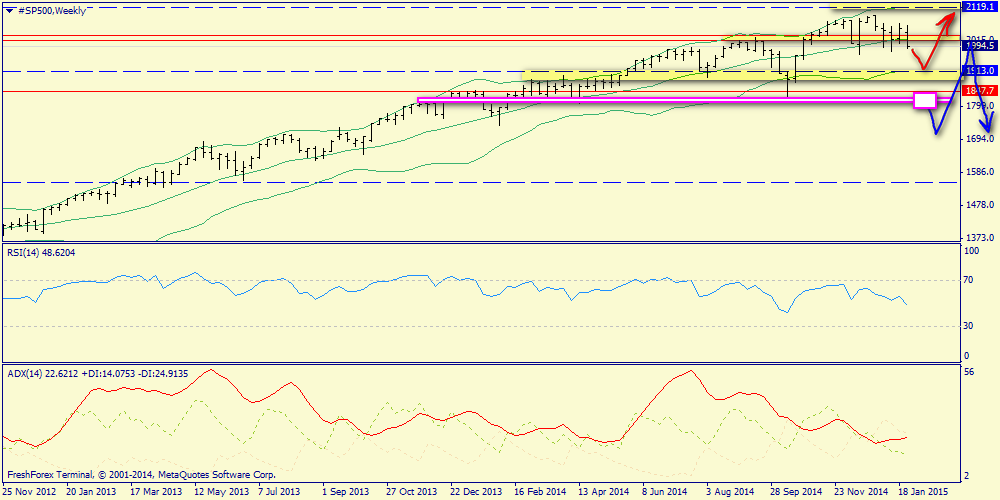 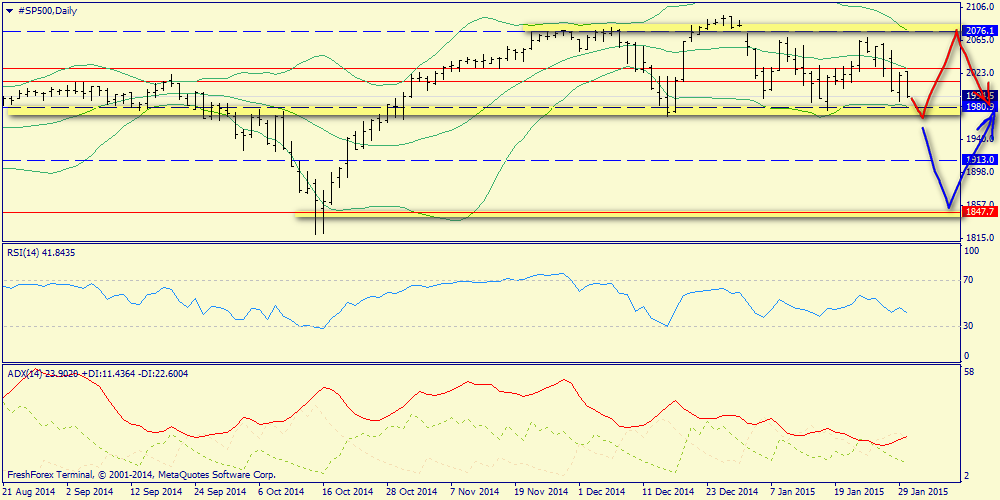 Conclusion: So there are quite good chances for a correction in the 1847.7 area. In this case, there are two significant trend support at 1980.9 and 1913.0. Both of them can show the existence of demand and trigger further growth in the area of 2076.1. Possible trade solutions:

Monthly chart: So, price was met with effective support at 49.70, which provoked a substantial correction to the month closure above 53 dollars per barrel. However, we can see that ADX is gaining momentum and is far from the pressure end, thus it probably fall to 38.50. 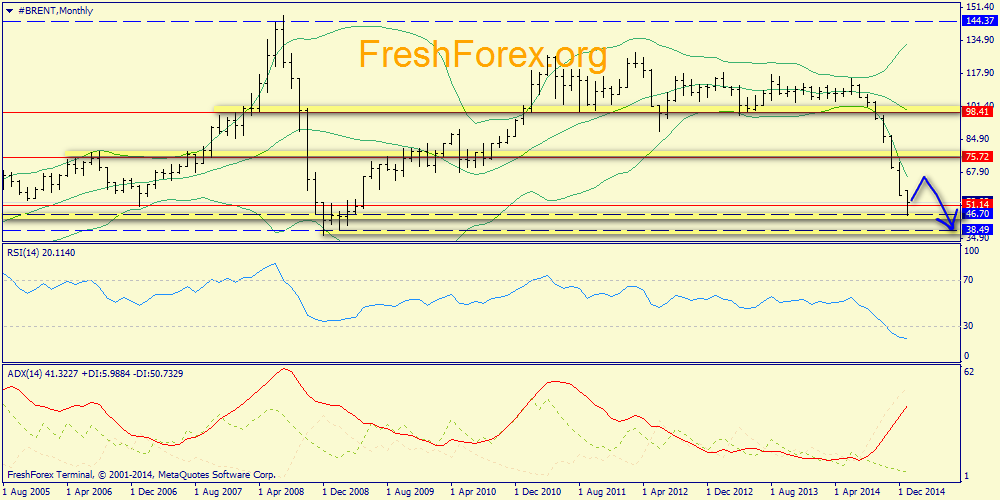 Weekly chart: Bulls have punched internal bar, which gave them a reason to roll back to the middle Bollinger band (75.72). But we can also see the potential on the Conservation of Southern envelopes. Purpose - 40.82 (lower Bollinger band). Therefore, buyers need to be very careful. If I were a conservative trader, I would wait for sale signals, which are possible to appear in the 75.72 area. All mentioned levels of Bollinger envelopes are dynamic. So, while maintaining the bearish potential, the middle band is likely to fall more and this level will need to be adjusted. 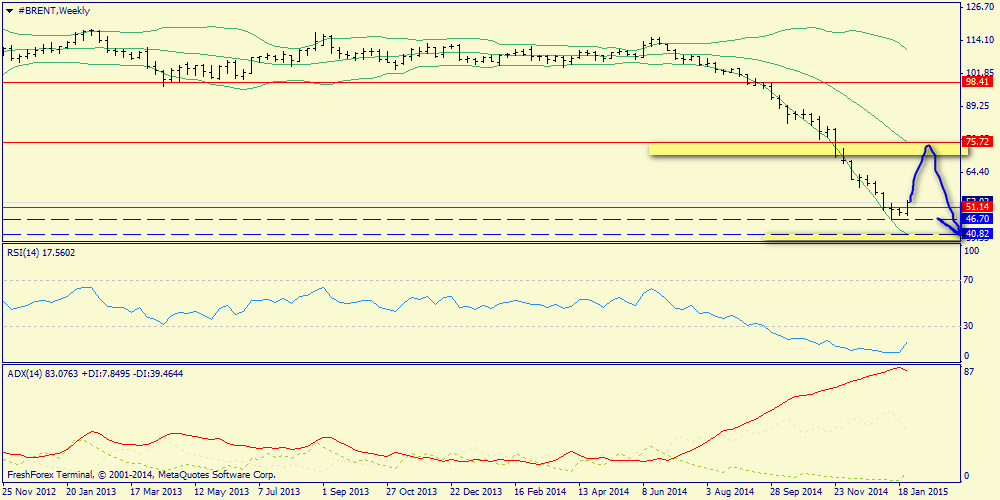 Day chart: Another imposing resistance lies at 55.23 (upper Bollinger band). ADX turn from bullish movement, so the buyings will be possibly ended at 55.23 (s. Red arrow). In case of a successful breakout above, we will get the potential for growing to 75.72 (blue arrow). The immediate purpose of the bottom - 46.70 (lower Bollinger band). 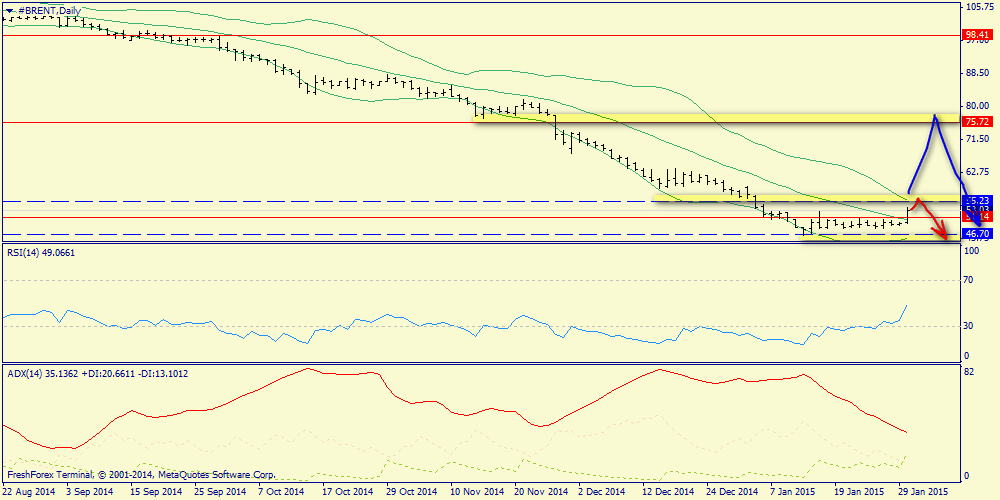